In the first installment, we reviewed what free radicals are, how antioxidants work, and why they often fail to deliver health benefits. Many brilliant people, including Linus Pauling, thought they had discovered the fountain of youth in antioxidants. When scientists hold beliefs that are contradicted by observation, it’s call for further investigation — even if those people have been awarded a Nobel prize.

Free radicals can go off like a bottle rocket inside your cells and wreak havoc. But that’s not the whole story. Reactive oxygen species (ROS, a type of free radical) are also a byproduct of energy metabolism. They’re inescapable, and evolution has turned these lemons into lemonade. ROS are used by the body as a signal to indicate a stressed state. When this signal is received, the body increases production of endogenous antioxidants, such as glutathione and a variety of enzymes. Our natural defense systems are highly effective at operating within our cells and preventing damage to DNA and cell membranes. In fact, our immune system uses ROS to destroy pathogens.

Rather than trying to shield ourselves from free radicals, science is now indicating stress is vital to our health. The key is in the dose.

What’s Bad Is Good (But Not Too Much)

In toxicology, there is a saying that “the dose makes the poison.” Many things that are toxic in large doses are harmless or even beneficial in small or intermittent doses. A famous example is exposure to low doses of nuclear radiation. Everywhere on Earth, you find varying amounts of naturally occurring radiation. Scientists studying this phenomenon mapped out areas with high levels of background radiation, expecting to find cancer clusters. Instead, they found the opposite. Cancer rates were lower. The hypothesis is that low doses of radiation trigger our body’s defense mechanisms and are actually protective. 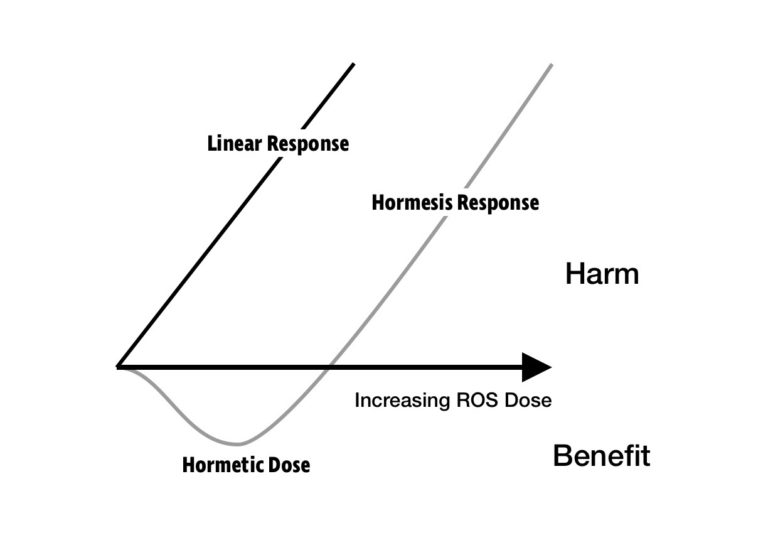 A similar dose-response phenomenon called hormesis has been observed in other contexts. A hormetic stressor follows a biphasic dose-response curve, whereby either too high or too low a dose is harmful. The beneficial dose is found in the middle. With a linear dose-response curve, any increase in dose is harmful. Nuclear energy regulators use a linear no-threshold model to create safety guidelines, which often stokes an irrational fear of nuclear energy, leading to fewer nuclear power plants. It has been argued that more people died in the evacuation from Fukushima after their nuclear power plant was hit by a tsunami than died from the radiation.

Exposure to the cold is another hormetic stressor. In response, our body activates our stress response systems. We begin to shiver to raise our core temperature. This causes an elevation in ROS and simultaneous increase in endogenous antioxidants. Interestingly, exogenous antioxidant supplementation blunted this response in rats. Too much cold exposure can lead to hypothermia, which is deadly. However, moderate exposure is believed to be healthy.

Survival of the Fittest Mitochondria

Mitochondria are the power-generating organelles within our cells. They are similar to bacteria and have coevolved with nearly all complex forms of life on Earth. They convert oxygen and energy substrates such as glucose and fatty acids into energy. There can be hundreds or even thousands of them inside of a single cell, depending on the type. Muscle and liver cells are densely packed with mitochondria, and exercise can increase this density, making them more energetically potent.

Oxidative energy production in our mitochondria is responsible for around 90% of ROS production within our bodies. Peak physical exertion elevates our ATP production by several orders of magnitude and consequently our ROS production, too.

Mitochondria are especially vulnerable to damage by free radicals, including the ones they generate. Compared to healthy mitochondria, damaged ones produce greater levels of ROS, leading to further damage. Out-of-control ROS production eventually damages other cells and the entire body. This downward spiral is the basis of the mitochondrial free radical theory of aging, whereby damaged mitochondria accumulate as we age.

Animals with longer life spans tend to have slower metabolic rates and therefore may also suffer less damage from ROS production. Those who practice calorie restriction as a means of improving longevity may be doing so with this theory in mind: Slow your metabolism and live longer — like a sloth.

It was long believed that the life span of animal species generally trended upward from the smallest to the largest animals. Nick Lane, an evolutionary biochemist, challenged that idea, noting an “almost U-shaped curve of longevity versus metabolic rate.” Animals with very slow metabolism, like tortoises, live for a very long time because they are under very little oxidative stress, according to Lane. On the other end of the spectrum, birds have a fast metabolic rate and long life spans. He suspects they have evolved to select for higher-quality mitochondria.

Lane suggests the best way to improve the quality of your mitochondria is to induce selective stress at the cellular level. Exercise, diet, and fasting are hormetic stressors that cause weak cells to die off. This process is called apoptosis — programmed cell death — and it’s vital to the health of an organism. A healthy body is constantly being broken down and rebuilt, one cell at a time. This cycle of death and renewal is essential to life. In fact, a cancer cell is one that has broken free of this cycle, unable to shed the damaged cells. They grow aggressively, but their kill switch (apoptosis) is shut off.

Dr. Michael Ristow of the University of Jena in Germany has proposed an alternative to the free radical theory of aging. This theory, called “mitohormesis,” posits that stress imposed by exercise follows a hormetic dose-response curve. General physical activity and intense intermittent exercise are extremely healthy, whereas inactivity and ultramarathons are not. Exercise has been associated with reductions in heart disease, Type 2 diabetes, cancer, neurodegenerative diseases, obesity, and more. Exercise results in a temporary but dramatic increase in oxidative stress. This stimulates the body’s natural antioxidant defense mechanisms and cellular repair pathways. In Ristow’s words, adaptation to exercise “works like a vaccination — repeated low doses of free radicals will increase stress resistance.”

Ristow made waves in the fields of exercise and nutrition in 2009 when he and eight colleagues published “Antioxidants Prevent Health-Promoting Effects of Physical Exercise in Humans,” which provided evidence that moderate doses of vitamins C and E blunted adaptations to exercise. In the study, 40 healthy young men trained five consecutive days per week for four weeks. The training sessions are described as “20 min of biking or running, 45 min of circuit training, and 20 min periods for warming up and cooling down.” The study authors then split the men into two groups. Both groups followed the same exercise routine, but one group took supplementary antioxidants (1,000 mg/day of vitamin C and 400 IU/day of vitamin E). Members of the control group improved their insulin sensitivity as expected, but this effect was not seen in the antioxidant group. According to Ristow et al., “Physical exercise has been shown to be effective in preventing type 2 diabetes in high risk individuals and may be even more effective than the most widely used anti-diabetic drug, metformin.” The antioxidant group also did not upregulate their bodies’ endogenous antioxidant production (superoxide dismutases 1 and 2; glutathione peroxidase).

In 2016, Ristow published a follow-up with co-author Troy Merry: “Do Antioxidant Supplements Interfere With Skeletal Muscle Adaptation to Exercise Training?” Most prior work on this topic had focused on aerobic exercise. Ristow and Merry’s paper instead presents evidence that antioxidants might interfere to a greater degree with high-intensity training. They posit ROS signaling mediates strength training adaptations in a nonlinear hormetic dose-response.

The paper summarizes the results of several studies:


Ristow and Merry admit the total body of evidence against antioxidant supplementation is not conclusive but argue there is a growing body of evidence to suggest it “may hamper or prevent the signalling of important adaptations such as muscle mitochondrial biogenesis, insulin sensitivity and hypertrophy.” Antioxidants might have short-term use in situations where ROS will be abnormally elevated, such as a multi-day contest. However, based on the current evidence, they advise against supplementing antioxidants beyond what is provided by a healthy diet. 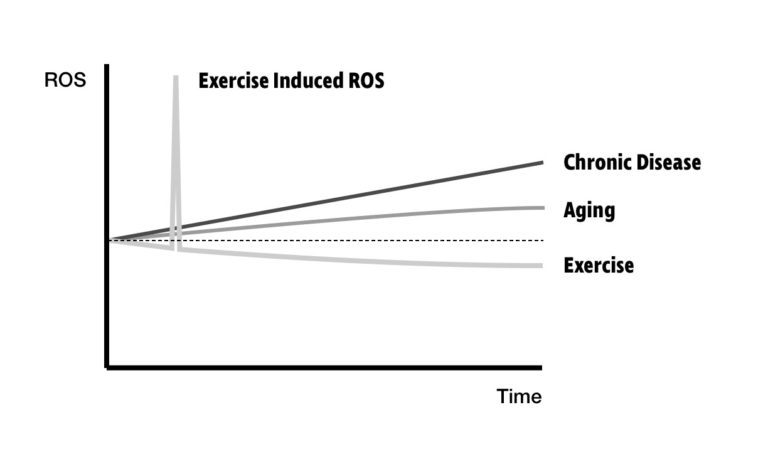 A hypothetical model of the effects of exercise, aging, and chronic disease on reactive oxygen species production

There are two key takeaways from Ristow’s research: 1. ROS act as chemical messengers to trigger a cascade of events that improve our health over the long term, and 2. antioxidant supplements may have the unintended consequence of neutralizing these ROS signals. The transient two-fold increase in ROS during exercise is nothing to worry about. They signal our body to upregulate our endogenous antioxidants and cellular repair pathways, thus improving our long-term oxidative stress resistance. The health benefits of exercise greatly outweigh the dubious benefits of antioxidant supplements. In a very real sense, exercise is an antioxidant.