The Toxic Truth About Sugar

Question: What is the basis for arguments to restrict sugar consumption?

In this 2012 commentary in Nature, Robert Lustig, Laura Schmidt, and Claire Brindis claim sugar harms individuals and society in similar ways to tobacco and alcohol. They argue similar measures to restrict its consumption are warranted.

According to United Nations data (1), 2011 was the first year in recorded history when noncommunicable disease mortality exceeded that of infectious disease. Obesity and metabolic disease have spread to lower- and middle-income countries. Now, a larger share of the worldwide population is obese rather than malnourished, and 80% of deaths are attributable directly or indirectly to obesity and poor metabolic health. Rates of these diseases have increased over the past 50 years alongside a three-fold increase in the consumption of added sugars.

Sugar is ubiquitous in our current processed-food-rich environment, as it can be found in nearly all processed foods (3). The figure below outlines mean daily sugar consumption by country; consumption in many countries exceeds 300 calories per day.

Increasingly robust evidence indicates sugar is uniquely toxic and is not merely “empty calories” but instead specifically deleterious to health (4). Fructose is directly toxic to the liver, having similar effects to alcohol; increased sugar consumption has been linked to fatty liver disease, impaired liver health, hypertension, diabetes, insulin resistance, heart disease, and other associated conditions. 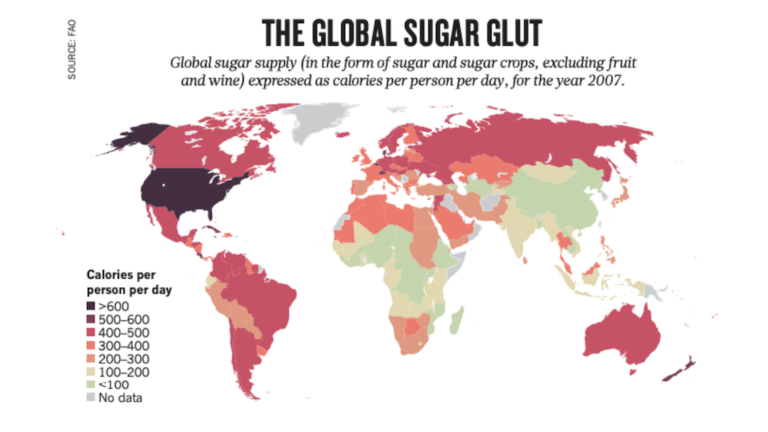 Given these observations, Lustig, Schmidt, and Brindis argue there is sufficient basis for systemic efforts to reduce sugar consumption, which may include taxation, availability restrictions (e.g., making illegal the sale of sugar-containing beverages to minors), or other measures similar to those used to reduce alcohol and tobacco consumption.