His best score in his rowing prime was 5:56—an all-out effort that left him in a physical shambles, he said. 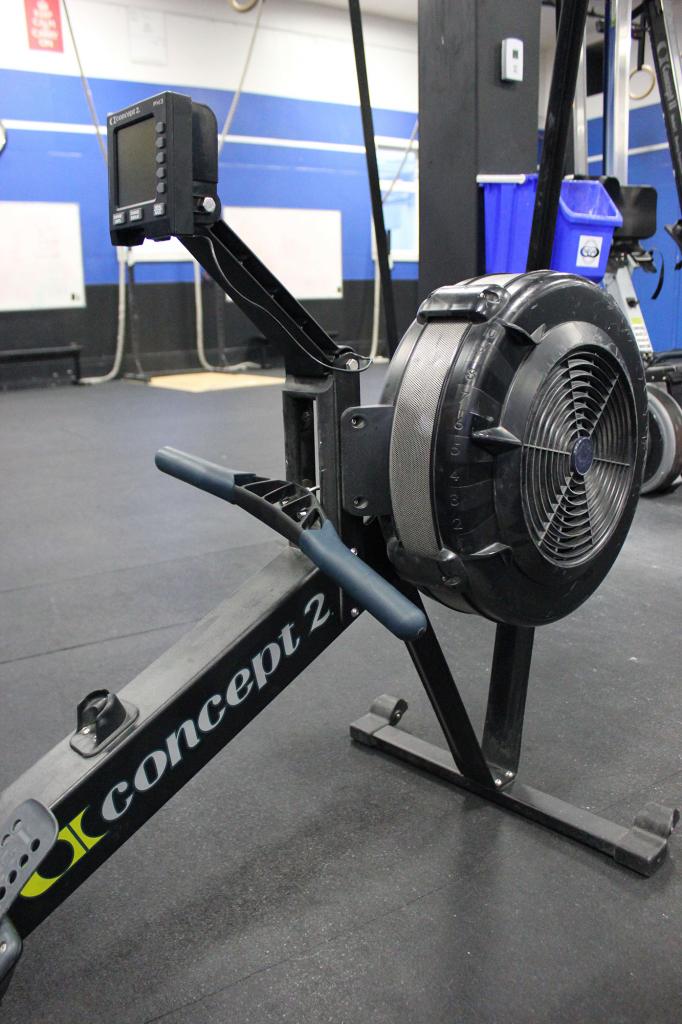 For meters or calories? Evaluate the workout carefully and choose the strategy that will allow you to complete it quickly. (Emily Beers/CrossFit Journal)

Peter Dreissigacker is the founder of the rowing company Concept2 Inc., a business he started with his brother Dick back in 1976.

Concept2’s ergometer monitor has a built-in algorithm that was designed to mimic the fluid resistance of a rowing shell going through water, Dreissigacker explained. This means a monitor on the meters setting—as opposed to the calories setting—forces a rower to work really, really hard to increase his or her speed, he said.

“That’s what happens when you’re in a boat. It’s because of the drag on the water. This means you put a whole lot more effort in and you go just a little bit faster.”

Thus, rowing 500 meters in 1:45 can make you feel like you’re going to die, while going just five seconds slower over the same distance barely hurts at all, he added.

When you’re competing in the sport of rowing, it makes sense to go as hard as you can because the only goal is to move the boat faster—or to get the best possible time on the ergometer—but using a rowing machine during a multi-modal CrossFit workout changes the game completely, Dreissigacker said.

“The way the ergometer is designed … throws a wrench into CrossFit competitions, as it has created this whole dilemma of ‘how hard do you go?’” Dreissigacker explained. 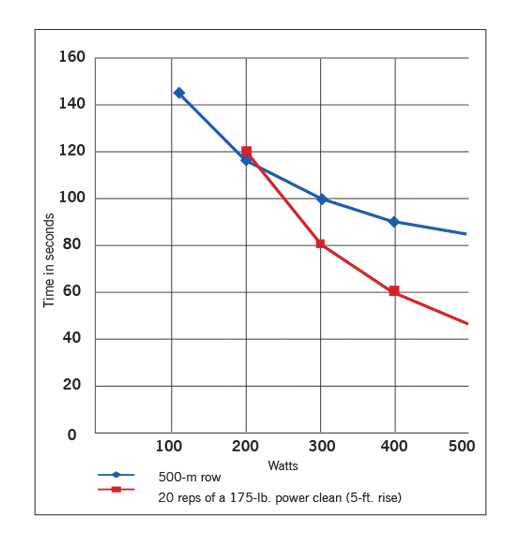 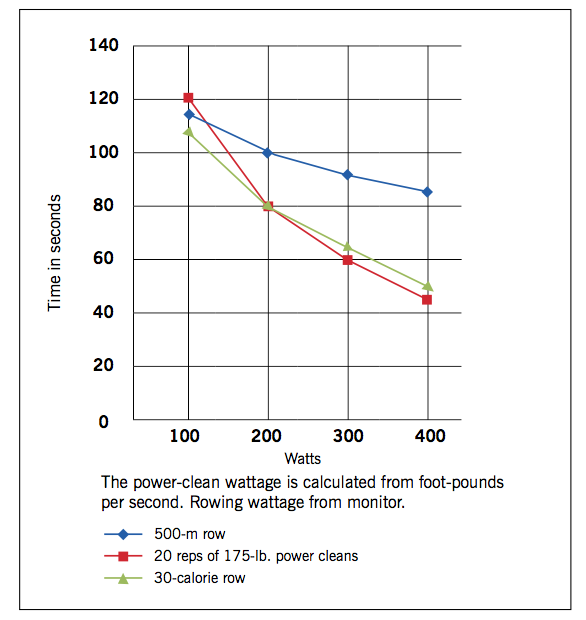 Figure 2: Time to complete a 500-meter row, 30-calorie row and 20 175- lb. power cleans at increasing power outputs. Note that the increased effort is rewarded similarly when comparing the row for calories with the barbell work. (Source: Peter Dreissigacker)

“The graph illustrates that as the athlete’s power increases, the time to complete the rowing segment decreases, but not as fast as with other movements, like a power clean in this case,” he said.

In other words, you’ll save more time by working hard on power cleans than you will on the rowing machine. For example, slacking off to a 70 percent effort during power cleans will hurt your overall time in a workout far more than slacking off during a 500-meter row, Dreissigacker said.

Applying this information to get the best time on Jackie, you might complete the 1-kilometer row 10 to 15 seconds slower than your best all-out effort, ensuring you come off the rowing machine relatively fresh and ready to pick up the barbell right away.

If you row too hard, it might take you 15 seconds just to stumble off the machine and another 15 seconds to recover enough to consider picking up the barbell. On top of that transition time, you’ll likely have to slow your thrusters and break more regularly, causing you to add more seconds—or minutes—to your overall time.

Jackie clearly illustrates the point Dreissigacker made with his graph: You’re better off slowing down the rowing and hitting the thrusters at 90 percent.

"Going faster makes it exponentially harder, and the effort level isn’t worth it for five seconds over 500 meters."
—Jonathan Burns

Burns—a CrossFit Rowing Specialty Course coach—doesn’t need a graph to explain Dreissigacker’s conclusions about the best way to approach a row in most multi-modal CrossFit workouts. He’s learned from experience in the sport, he said.

“Going faster makes it exponentially harder, and the effort level isn’t worth it for five seconds over 500 meters. So I definitely use the row portion of the workout just to catch my breath.”

Of course, the fitter you are, the faster your “comfortable” rowing pace and the lower your overall workout times. Fit, intelligent athletes will know the pace they can maintain in advance of work off the rower, and they won’t be rattled when a rival pulls 500 meters in 1:28 and leaves the ergometer first. 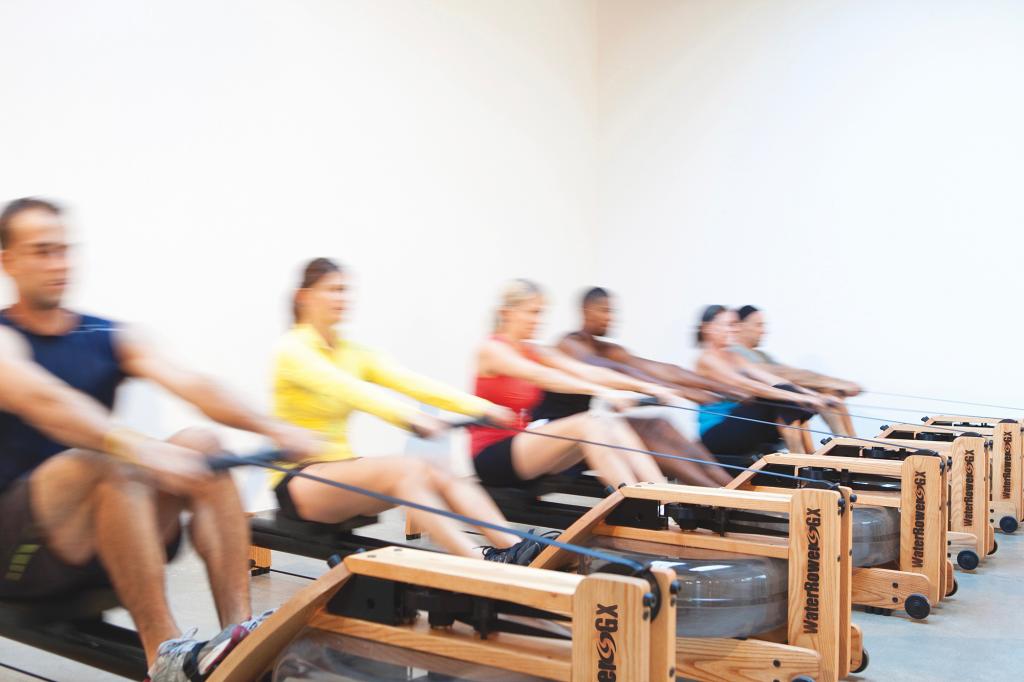 Wise coaches will tell you that you often can’t win a workout on the rower, but you can certainly lose it if you aren’t careful. (Andrew Stiles)

When a row is measured in calories, it’s a different story for a CrossFit athlete, Dreissigacker said.

“If the work is done in calories, it’s not the same game as if it’s done in meters because the calories don’t have the same effect as the meters,” he said.

He added: “The calorie setting is about as scientific as we can be without plugging in all the individual factors, like body weight and metabolism speed. It ends up being a unit that resembles calories somewhat and is consistent for everyone.”

The calorie setting on the ergometer doesn’t take water resistance into consideration the same way, so calories are earned differently than meters. On a practical level, the calorie setting rewards athletes for pushing harder. And much more time can be made up when the row is for calories, Dreissigacker said.

To emphasize the point, Dreissigacker again used a graph, this time comparing calorie rowing to power cleans. The result: The two movements look quite similar in terms of effort-to-reward ratio (see Figure 2).

“This means you’re probably better off pushing the rowing (portion of a workout) a little harder on calories,” he said.

When the ergometer is set to calories, lower levels of effort cost the athlete time and actually force him or her to row farther than athletes working with more intensity.

If Athlete A held an average of 2,653 calories per hour—a blistering pace—he would spend 1:38 on the rowing machine to complete all 72 total calories, rowing 611 meters in the process (see Table 1).

If Athlete B held an average of 507 calories per hour—quite slow—he would spend 8:32 on the rowing machine, covering 1,421 meters.

Table 1: Time and distance required to earn 27, 21, 15 and 9 calories on the ergometer at various intensities. Note that an athlete rowing a 1:30 pace will accumulate the total calories about three minutes faster than an athlete rowing at a 2:10 pace. The second rower will have to cover an additional 437 meters to accumulate all 72 calories. (Source: Peter Dreissigacker)

Finding your perfect rowing pace for a CrossFit workout is a learned skill, Burns said.

He suggested athletes need to know what 100 percent effort feels like so they can determine other levels of effort.

“It comes down to becoming familiar with your paces from a time-domain standpoint,” he said. “For instance, if I know my 2-kilometer time is seven minutes, then I can hold a 1:45 500-meter split for seven minutes. So if I’m doing a workout in the five-to-10-minute time range, then I can expect (to use that number) to figure out my pace for that workout.”

For example, Christine consists of 3 rounds of a 500-meter row, 12 body-weight deadlifts and 21 box jumps. If you know the workout will take you 10 to 12 minutes, then you need to know your comfortable rowing pace for 12 minutes so you can aim to hold that pace for all three 500-meter pieces during Christine.

“Get to know your paces in both the meters (setting) and the calories (setting) and apply that to a (multi-modal) workout of a similar time domain,” Burns said. 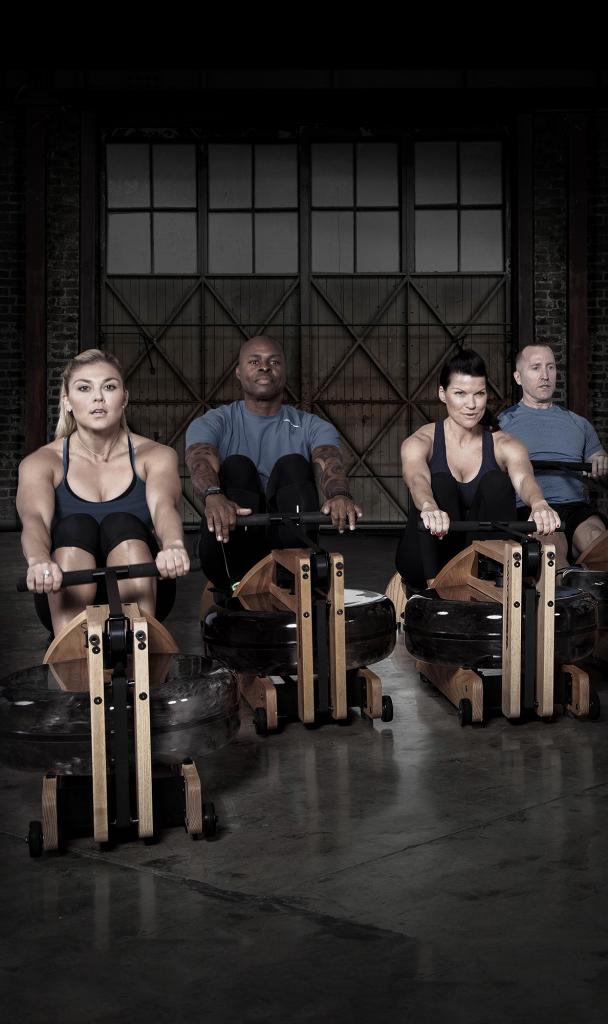 Overall, coaches say proper pacing is critical in all rowing workouts. Avoid going out too hard so you can sustain your pace for the length of the piece. (Andrew Stiles)

The key to staying on the machine for an entire 50-minute class comes down to understanding how fast you should go during short intervals and longer endurance pieces, Crosby said. It generally comes down to finding a consistent pace to hold throughout any given piece, he added. A world-class rower can close his eyes and hold virtually the exact same split time stroke after stroke for 30 minutes, Crosby explained. While that kind of precision is uncommon, Crosby hopes his athletes can become as consistent as possible.

“We talk a lot about flying and dying—meaning going out too hard and crashing. We don’t want that. The number one thing is when you’re watching your split time, try to hold that same split over and over and not let it fluctuate up and down.”

The best way to develop this awareness is simply to put in the strokes, Crosby said.

While Dreissigacker, Burns and Crosby all emphasize the importance of learning to pace to avoid obliterating yourself during a CrossFit workout, they also reiterate that you can still work hard on the rowing machine. When you improve your rowing mechanics and efficiency, as well as your endurance, power endurance and overall capacity, your 80 percent effort during a multi-modal CrossFit workout will also improve, Burns said.

The point is rowing is still important for a CrossFit athlete.

“It’s just that you’re usually not going to win the workout with the row,” Burns said.

But if you don’t row with intelligence, you can definitely lose it on the row.

About the Author: Emily Beers is a CrossFit Journal contributor and coach at CrossFit Vancouver. She finished 37th at the 2014 Reebok CrossFit Games.