Is Advice from the Heart Foundation Trustworthy?

Sanitarium claims eating two cereal biscuits a day will deliver enough plant sterols to reduce “bad” LDL cholesterol by up to 9% and will therefore lower your risk of heart disease. 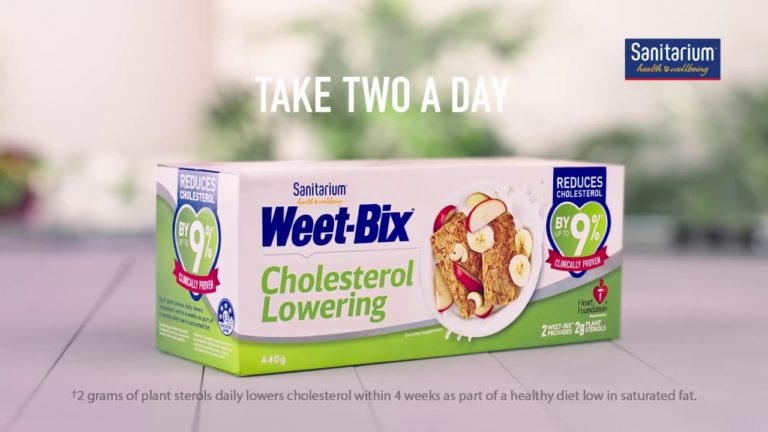 Plant sterols (phyto-sterols) are cholesterol-like substances found mainly in vegetable oils and to a smaller degree in legumes, breads, and cereal grains. They are said to lower cholesterol levels by inhibiting absorption of cholesterol in the gut.

Manufacturers have marketed the health benefits of foods that have been fortified with plant sterols and, as a result, have enjoyed considerable market growth — with the backing of the NHF.

But how trustworthy is the science behind Sanitarium’s marketing campaign, and is the NHF promoting evidence-based advice?

In 2017, Sanitarium staged the launch of its new breakfast cereal. Its entire marketing campaign relied heavily on the results of one small, non-replicated study funded by Sanitarium.

The marketing event featured Adelaide-based Professor of Nutrition Peter Clifton, a go-to expert for the NHF. Clifton posed agreeably alongside the cereal and Sanitarium executives.

When asked, Clifton admitted that using his image in the marketing campaign would lend credibility to the manufacturer’s claims. He also appeared in an advertorial for Sanitarium and accepted funding from the manufacturer to conduct and write the study, which was eventually published the following year.

The NHF joined in the chorus of praise by displaying its logo on Sanitarium’s cereal and claiming on its website that consuming plant sterols in Weet-Bix is “a simple way [for people] to help lower high cholesterol and therefore their risk of developing heart disease.”

Does the science back it up?

The short answer is no, according to a U.K. expert in obesity and nutrition science; Dr. Zoe Harcombe published an editorial suggesting plant sterols could, in fact, have the opposite effect of that suggested in Sanitarium’s marketing campaigns.

“No study has ever demonstrated that consuming plant sterols (2g/day) reduces the risk of heart disease. Cholesterol lowering should not be an end in itself,” Harcombe said.

U.S. dietitian and Ph.D. Adele Hite of North Carolina State University agreed, arguing the tiny shifts in LDL are unlikely to have any clinical benefit for people.

“We first have to assume that lowering LDL with plant sterols reduces risk of heart disease, and there is little evidence that this is the case. Is the reduction in the study clinically significant? It doesn’t seem so,” Hite said.

Clifton said he is a “strong believer in the usefulness of plant sterols,” but he conceded there is no evidence that plant sterols can reduce the risk of heart disease.

“To prove this with sterols would take an enormous trial far beyond the capacity of any company — food or drug,” Clifton said.

The Food Standards authority (FSANZ) also admitted as much. In a statement it said, “FSANZ does not have evidence on the relationship between eating plant sterols and reduction in the risk of heart disease in people.”

An analysis of Sanitarium’s study showed it was flawed, and experts suggested the marketing was misleading.

“Claiming that this study showed a 9% drop in LDL is disingenuous at best,. The study actually showed the average reduction in LDL with plant sterols was 5.6%,” Harcombe said, pointing out some people showed LDL reductions as little as 2.4%.

“Therefore, given the large confidence interval in the study, the true population effect could be as low as 2.4%, but this wasn’t mentioned in the advertising,” Harcombe added.

Hite agreed: “A statement that says the confidence interval could result in ‘up to 9% reduction’ should be accompanied by ‘or as low as 2.4% reduction. This seems to not only be non-transparent, but inaccurate.”

In addition, the authors of the study reached their conclusion only after several participants were removed from the final analysis. Data pertaining to four different subjects were removed “because of large rises in LDL cholesterol from baseline,” Clifton wrote in the paper. He described the subjects as “outliers” and seemed to suggest that removing them would not have affected the results.

Harcombe was critical and suggested the results were unduly “manipulated.”

“It is completely unreasonable to remove people whose LDL rose in either or both of the intervention or control. I do not know how this got through peer review,” Harcombe said.

“Researchers cannot just leave out results that don’t suit them. Leaving out participants whose results didn’t suit the end in mind is definitely misleading,” Harcombe added.

The Australian watchdog whose role it is to investigate false or misleading advertising claims (ACCC) would not confirm whether it had received a complaint about the marketing of Sanitarium’s cholesterol-lowering Weet-Bix.

In addition, the national goods regulator, the Therapeutic Goods Administration (TGA), which did receive a detailed complaint, said the marketing campaign was not in its jurisdiction.

Concerns have also been raised about heavy reliance on studies that have been funded by the very industries that profit from the outcomes.

“The main meta-analysis cited in the study was written by authors who formulated the research questions and conducted the research and who also happened to be employees of Unilever which markets food products enriched with plant sterols,” Hite observed.

Clifton acknowledged in the paper that Sanitarium paid for the study, but he also claimed there were “no conflicts of interest” (COIs).

Professor Joel Lexchin of York University is an expert in the interactions between health practitioners and COIs.

“It is incomprehensible that this journal allowed ‘no COIs’ to be declared when the trial and the writing of the manuscript was funded entirely by Sanitarium and Sanitarium are the makers of the biscuit being examined,” Lexchin said. “This declaration of no COI is extremely deceptive and relies on a very narrow reading of what COI is. Clearly Clifton has a relationship with a company that could financially benefit from the article he has co-authored.”

“When lead authors of publications about clinical trials have a conflict of interest with the company making the product being studied, there is a greater likelihood that the study will produce positive results about the product,” Lexchin warned. “The idea that conflicts of interest don’t have an effect is simply naïve.”

The NHF stands by its advertising on behalf of Sanitarium. It states its support of the benefits of plant sterols is in accordance with advice from Food Standards Australia New Zealand (FSANZ) — whose evidence also happens to rely heavily on analyses performed by industry representatives.

NHF was adamant that any health claims made on behalf of its sponsors underwent thorough vetting: “[Our] guidelines ensure that our positions will always be impartial and evidence based,” stated the NHF.

But despite the charity’s protestations, the public perception that corporations have a stranglehold over consumer organizations is not going away any time soon.

“While the NHF’s corporate partnership clearly benefits a commercial cereal manufacturer, it harms the reputation of the charity. People can’t trust that which has been paid for,” Harcombe said.

Dr. Maryanne Demasi is a well-known investigative journalist whose work on scientific documentaries has been praised by the National Press Club of Australia for exhibiting “excellence in health journalism.”

Demasi earned a Ph.D. in rheumatology from the University of Adelaide in 2004. She currently works as a researcher for the Nordic Cochrane Centre.