Inside metabolically active cells, you will find little droplets of fat (more properly called lipid) that can be used as an energy source. Fat carries out many crucial roles in the body apart from being a pretty effective energy storage medium. At the cellular level, every one of the billions of cells in the human body requires fat as a component of its membrane structures. At the biochemical level, a tremendous number of the body’s important chemicals are composed of or created from fats — estrogen and testosterone, for example. Myelin, a chemical made from fat, surrounds neuronal axons and makes neural transmission effective. We have to have fat in our bodies for normal function, and fat needs to be in our diet to replace the fats used and degraded every minute of every day.

But these are not the fatty deposits we are so visually familiar with and obsess over eliminating. At the gross level, conglomerations of fat-containing cells called adipocytes form padding and shock-absorbing structures around the heart and other visceral organs. In its subcutaneous form, adipose tissue (an accumulation of adipocytes) provides a long-term energy source, a layer of insulation from minor environmental temperature challenges, and protection against physical insult. The fat under our skin has purpose and function. We need it.

Adipose cell accumulations, or adipose tissues, are located subcutaneously (under the skin), viscerally (surrounding internal organs), in bone marrow, in streaks along fascicular spaces in muscle, and in breast tissue. There is a great deal of variation in the morphology of subcutaneous and visceral deposits between individuals and across different sexes. The shape and location of these deposits seem to be affected by male and female sex hormones (testosterone and estrogen).

Men tend to accumulate more abdominal visceral fat than women, and women tend to accumulate more lower-body subcutaneous fat than men. No matter the location, fat deposits are not smooth sheets of tissue. They are opportunistic in where they develop, conforming themselves to any irregular nook or cranny available. As such, they can be mildly textured sheets, fingerlike projections, amorphous blobs, or anything in between.

Subcutaneous fat – The largest repository of fat is found under the skin and outside the underlying muscle. If you pinch the skin on the back of your hand, you are basically pinching the epidermis and dermis, as there is very little subcutaneous fat on the back of your hand. Half the thickness pinched is the thickness of those two layers. The thickness of the epidermis and dermis vary by anatomical location, but the back of the hand assessment gives us a starting point to look at how thin the layer of subcutaneous fat can be. Pick anywhere else on the body and pinch. The difference between that pinch and the pinch on the back of the hand is primarily fat. That’s the foundation of the skinfold measurement technique of determining body fat: The thicker the fold, the more body fat present. 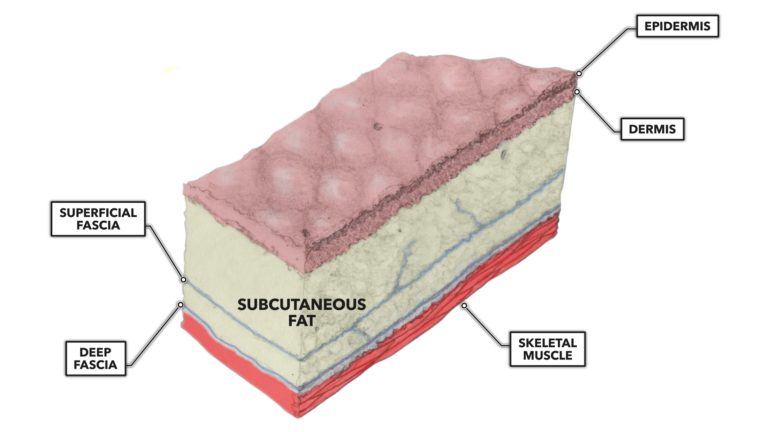 Figure 1: Subcutaneous fat presses up against the dermis from underneath, is divided into layers bounded by fascia, and loosely invests into the epimysium of the underlying skeletal muscle.

A common misconception asserts there are different types of subcutaneous fat. The basic concept is that there is regular fat and then there is cellulite, a reportedly different type of fat responsive only to special methods of fat reduction. There is no such anatomical distinction. The term cellulite was coined by a French cosmetologist early in the last century — coined as a means to market beauty products. Cellulite is simply normal fat cell clusters that have hypertrophied sufficiently to press against the skin and produce an irregular surface appearance.

Visceral fat – These are the deep deposits found around the internal organs. Specific regions of visceral fat can be named according to location: Pericardial (around the heart), mesenteric (covering and wrapping the inferior stomach and intestines, also known as omental), epididymal (near the reproductive system), perirenal (near the kidneys) are just a few. 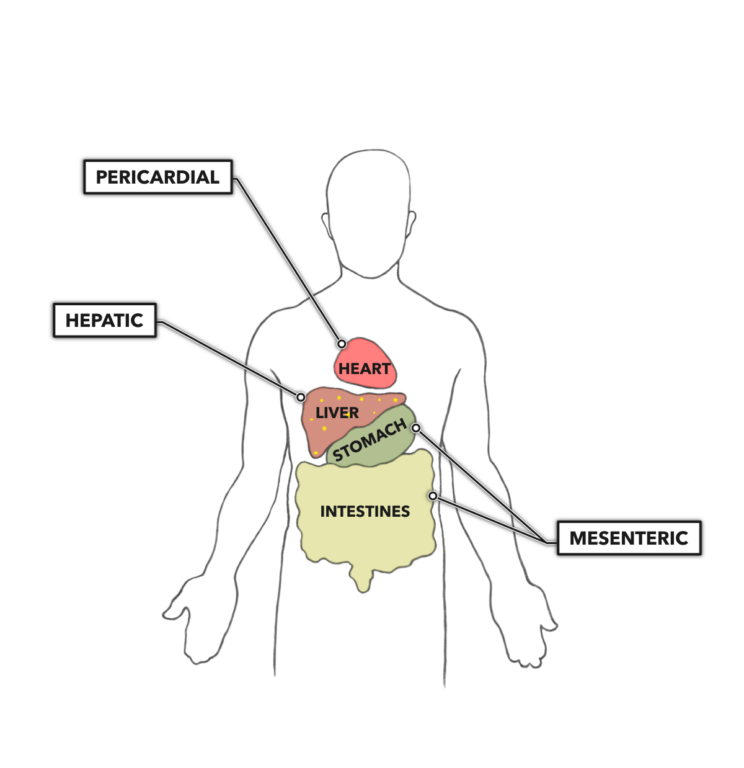 Although the cell structure of visceral fat is the same as that of subcutaneous fat, it is harder to lose because it is replenished as fast as or in some cases faster than it is depleted. It also is somewhat biologically protected, as its presence serves a protective function for the organs it encases.

Within the abdominal cavity, a subset of fat deposits called intrahepatic fat can be problematic. Rather than covering the organ, the fat deposits accumulate in the liver, altering liver cell morphology in a way that may, in turn, lead to the development of fatty cysts and hepatic scarring, elements of fatty liver disease.

Recently, new data about fat and disease risk is emerging. Researchers claim visceral fat within the abdominal cavity is “bad” fat and is more strongly related to cardiovascular disease than subcutaneous fat. This poses a problem — you can’t pinch visceral fat to measure it — but it also doesn’t pose a problem, because as subcutaneous body fat levels decrease with exercise and dietary discipline, visceral fat also begins to reduce. So we who train the public should address what we can see, subcutaneous fat, as that will provide the results our trainees desire for aesthetics, performance, and health.

Intramuscular fat – Frequently, we see that there are deposits of fat between adjacent muscles, muscle fascicles, or cells. These deposits often serve as an energy substrate and protection for arteries, veins, and nerves that supply the muscles around the fat deposit.

It’s easy to get a feel for where muscle-related fat is found in the body. Just look at what is displayed in the grocery store meat aisle. A ham slice shows a prominent intramuscular deposit along the femoral space. Contrast this to the subcutaneous fat deposits of the outer-most anterior wall (bacon), where fat is stored between the different abdominal muscles and layers (intermuscular fat).

How Much Stored Fat Do We Actually Need?

Let’s first consider how much energy is stored in the body’s fat deposits. If we have a 100-kilogram person (220 pounds) with 25% body fat, there are 25 kilograms of fat present (55 pounds). If each gram of fat (1,000 grams per kilogram) represents 9 calories of stored energy, then there are 225,000 stored calories on that person. This quantity of energy dwarfs the body’s stores of its other main energy source, carbohydrate, with about 600 grams or 2,400 calories of available carbohydrate stores in muscle and the liver (about 1% of muscle mass and 10% of liver mass).

If we assume the 100-kg individual burns 2,500 kcal per day, it would take about 90 days to deplete that much fat — that is if we could mobilize and consume 2,500 of those fat calories each day, obtain other required nutritional elements in a calorie free form, and a bunch of other minor things that make a no-food-intake scenario problematic. The bottom line here is that in modern society, with food largely available 24/7, there are virtually no reasons to accumulate enough fat storage to support 90 days without eating.

So, we can suggest, based on the metabolic calculations above, that high levels of body fat are biologically unnecessary for modern survival. Obesity-related health data also suggest that higher levels of subcutaneous body fat are potentially health diminishing. So not only are higher levels of body fat biologically unneeded, they may also produce negative health outcomes. Further, when we consider power-to-weight ratios in athletics, carrying additional fat inhibits performance.