Effects of Intermittent Fasting on Health, Aging, and Disease

This comprehensive 2019 New England Journal of Medicine review summarizes the impact of intermittent fasting at both a cellular and an organ/body system level. It then outlines how these changes may benefit individuals with a variety of disease states.

Intermittent fasting, as defined by review authors Rafael de Cabo and Mark P. Mattson, is a period of food restriction sufficient to clear liver glycogen stores and dramatically suppress glucose, insulin, and amino acid uptake by cells. During fasting, fatty acids are released into circulation and taken up by liver cells, which produce ketone bodies to be used as fuel by other cells. These changes result in a cascade of systemic and cellular responses related to the suppression of insulin and IGF, energy depletion in cells, and the regulatory impact of ketone bodies (1). Diets that induce this change include complete abstention from food for one or more days (as is done in some forms of alternate-day fasting and 5:2 fasting), as well as time-restricted feeding (where food is only eaten during a limited number of hours each day) and near-fasting regimens (where daily caloric intake is restricted to 500-700 calories (2). 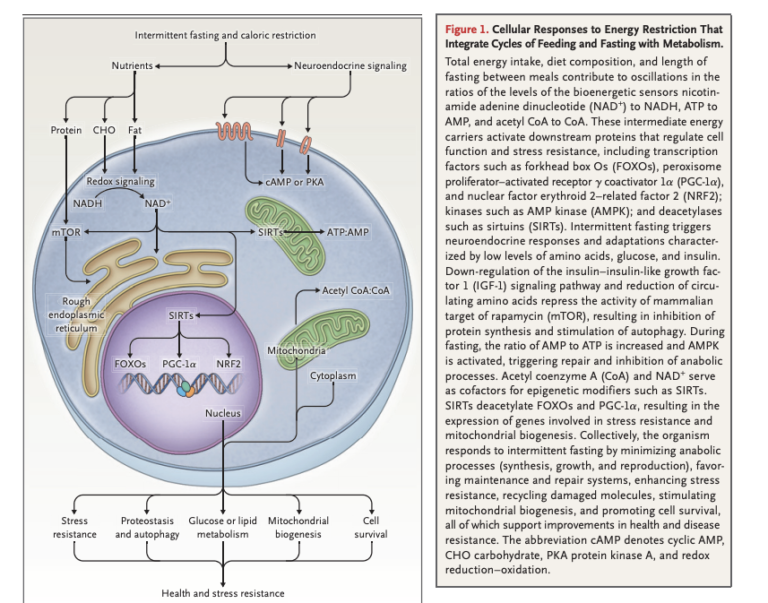 After 10 to 14 hours, liver glycogen stores are depleted, and free fatty acids (FFAs) are released into circulation from the adipose tissue. The liver converts these FFAs into ketone bodies, which provide fuel for other tissues. Systemically, this leads to a variety of changes across multiple organ systems related to reduced cellular energy availability and reduced activation of pathways related to glucose and insulin (Figure 2). 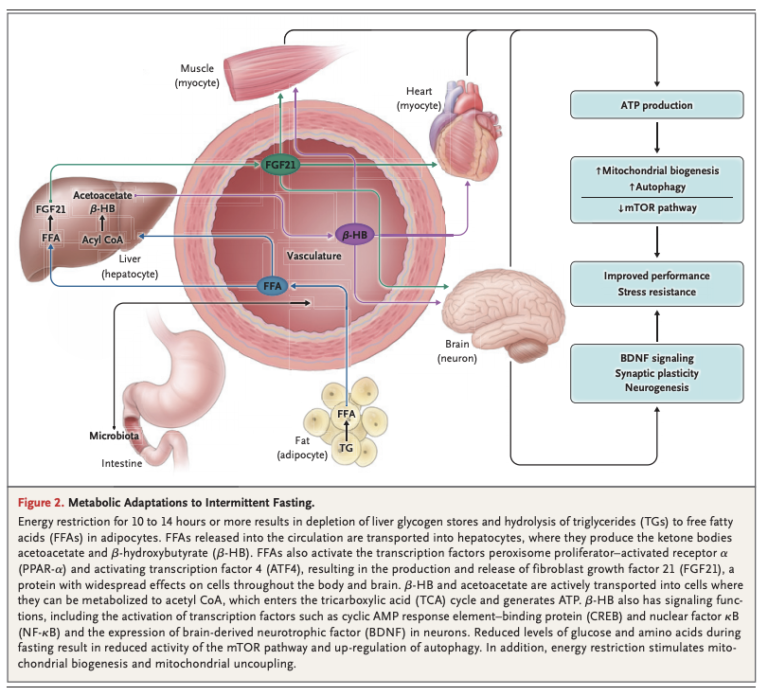 These metabolic responses are similar across a variety of organisms, suggesting they are evolutionarily conserved. Note individuals eating a typical American diet, with three daily meals and snacks in between, will rarely, if ever, reach a fasting state (3).

Animal research has consistently shown that caloric restriction, whether chronically or through intermittent fasting, improves lifespan (4). This same data suggests sex, age of diet initiation, and the composition of the remaining calories can have a significant impact on the degree of benefit from caloric restriction; some regimens show greater benefit than others, but these differences lack sufficient consistency to clearly indicate the determining factors. Human studies including the Okinawans and members of the Caloric Restriction Society suggest long-term compliance with fasting is associated with longevity and low levels of metabolic disease (5).

Figure 3, below, outlines the potential impact of fasting regimens on specific markers of disease. 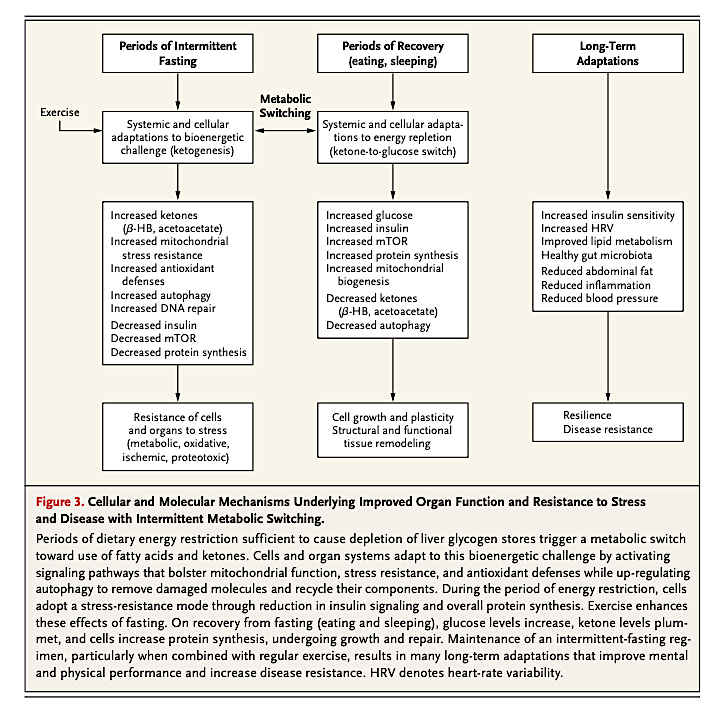 Human trials suggest intermittent fasting confers greater improvements with regard to insulin sensitivity and fat mass in overweight and/or diabetic subjects than similar levels of caloric restriction or other diets leading to similar weight loss (6).

Human and animal trials suggest intermittent fasting improves cognitive function, specifically various forms of memory. This means fasting may prevent or slow the progression of cognitive disease — particularly interesting given the lack of viable alternative treatments (7). These benefits may be related to improvements in neuronal mitochondrial function, antioxidant defenses, and/or DNA repair (8).

Animal studies have shown intermittent fasting reduces spontaneous tumor occurrence. It also suppresses the growth of a variety of tumors while increasing the susceptibility of tumor cells and the resistance of healthy cells to chemo and radiation (10). Similar human studies are in the early stages, but preliminary case studies and trials suggest the vast majority (~95%) of cancer patients can adhere to a fasting regimen without side effects, and for some types of cancers, fasting may suppress tumor growth and increase survival (11).

Preliminary evidence similarly indicates intermittent fasting may be beneficial in patients with inflammatory and autoimmune conditions, such as asthma, MS, and arthritis; animal and human studies have demonstrated functional improvements in as little as two months when patients with MS begin a fasting regimen (12).

Finally, intermittent fasting has been found to improve outcomes and reduce tissue damage related to surgery and traumatic injury, including traumatic brain and/or spinal cord injury (13).

The review studies indicate initiating fasting is challenging but feasible, particularly if patients are prepared for the major barriers — namely, the ingrained culture of eating three meals per day and the temporary hunger, irritability, and poor concentration patients experience during the first month following a fasting regimen.

Takeaway: The majority of fasting research remains limited to animal research and must be treated with caution with regard to human populations. However, the existing evidence and our mechanistic understanding of the impact of fasting consistently suggest the simultaneous suppression of glucose and insulin levels and upregulation of ketones induced by fasting lead to stress resistance, cellular repair, mitochondrial biogenesis, and upregulation of a variety of cellular maintenance processes, all of which may lead to improvements in a wide variety of conditions linked to poor metabolic health.